Picture this: a cavalcade of cars blurring up the Mriehel bypass, 8AM windy-weekend fog hazing the windshields, windshield wipers waving like airport staff trying to frantically guide a slightly askew plane back onto the runway. It’s Friday morning, and there’s very little traffic as all six of Jupiter’s moons have aligned and pleased one of the slumbering eldritch gods trapped somewhere between the tarmac and thin rumours of oil.
A tiny beetle-blue Toyota Passo trundles up the hill, makes a left, and parks.
Our copywriter struggles her way free with a bag stocking no less than five notebooks and a handful of glittery pens. She closes her car and makes sure it’s locked.
She is wearing pyjamas. 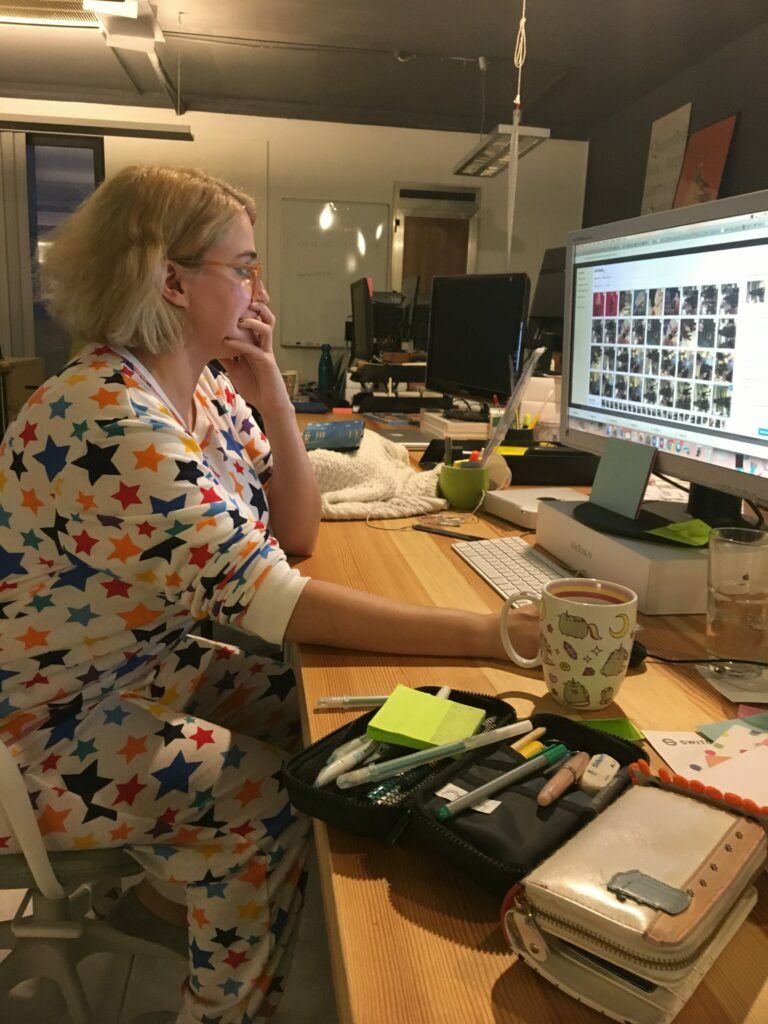 They are not fashion statement velvet-and-silk pyjamas, maybe-you-can-wear-them-out-and-you’ll-look-cool pyjamas. They are fleecy, creamy-white pyjamas splashed liberally with even-dogs-can-see-them neon stars, escaped-from-a-circus pyjamas, why-God-why pyjamas – but our copywriter has not, in fact, lost her mind after a full 50 days writing December content.
It’s pyjama day at the office, and we’re also decorating, because Teri decreed it so, and so it must be done. It was, and still is, unavoidable, as the pyjama day/Christmas decorating reminder has been blinking on the calendar since September, and Teri made sure to remind everyone last night via Whatsapp, email, text message, psychic connection, and subliminal post-it notes that Christmas decoration/pyjama day is on, and no excuses to avoid it will be accepted.
(Teri would like to inform the general public that she did in fact send an email saying that you can appear from home in normal clothes and change into pyjamas but hyperbole is the cornerstone of our copywriter’s personality and without it she’s just a coffee addict in rainbow star pyjamas).

With two weeks to go until shutdown, and our road in Mriehel decorating for Christmas by means of one lonely stuttering star on the corner of a building maybe-almost-certainly haunted (the Wholesaler across the road has strings of red lights blinking ominously as soon as it starts to hint of dark, which gives the road a very Stephen-Hill-meets-Grady-Hendrix atmosphere) and perfect Christmas trees standing in doorways, corners, and countertops, it’s only fitting that Switch gets into the swinging seasonal atmosphere and decorates the office for Christmas, too.
However, opinions on Christmas are hugely split down the middle.
For instance, this is Teri:

And this is Thomas:

And this is Mel:

This is Astrid, preparing for Secret Santa and the Switch Awards:

And this is our copywriter, worrying about what to get her Secret Santa:

Bonus – raw footage of Nella, driving back to the office after being roped into visiting the Christmas section of Homemate:

Teri maintains that the office is full of Grinches.
The rest of the office maintains that nobody who isn’t actually Santa Clause, a reindeer, or one of his elves should be that excited about tinsel and balancing precariously on a stool (or in Matt’s case, three stools) to decorate a plastic tree.

How long does it take to decorate a Christmas tree?

Case in point: Teri blocked off the day for decoration from 2:30PM, as in the afternoon. As in three hours before the office actually shut. Melissa’s sane question of ‘does it take that long to decorate a tree?’ was met with a sudden stamp of Grinchood, which Melissa is heartily embracing because at this point Teri is on full Christmas warpath and neither hell nor high water will stop her until the office is festive, damn it. 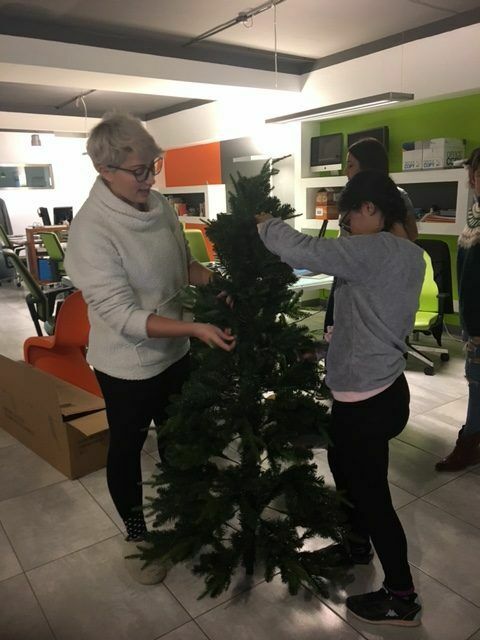 Therefore, a tree was procured. Tom, fashionable pyjama’d, collected a paper bag full of decorations from downstairs before jetting off elsewhere for mysterious errands involving caster sugar and Santa hats. The designers collectively agreed on making the Christmas tree look, according to Brendon, ‘half-decent’.
It isn’t Christmas until you end up with a faceful of artificial pine.
Teri left the office to run errands, leaving behind a collective of people looking forward to it, and none or two dreading the prophesied explosion of deck-the-halls red and green and white happening later on in the day.

And then: Teri reappeared, prompting a slow plod towards the Christmas tree, accompanied by a designer-approved playlist.
The Christmas tree is about three Naomis tall, and has a few noticeable spaces, which has been collectively considered a design feature. Teri abandoned a bag of Christmas decorations on the floor with the instructions ‘decorate!’ and disappeared, shortly before it was discovered that all the baubles in the bag had no hooks on them. There were also snowflakes, reminiscent of Maltese winters – obviously. A tentative suggestion for fake snow was met with a death glare of some proportions from Teri, a vociferous anti-fake-snow advocate. 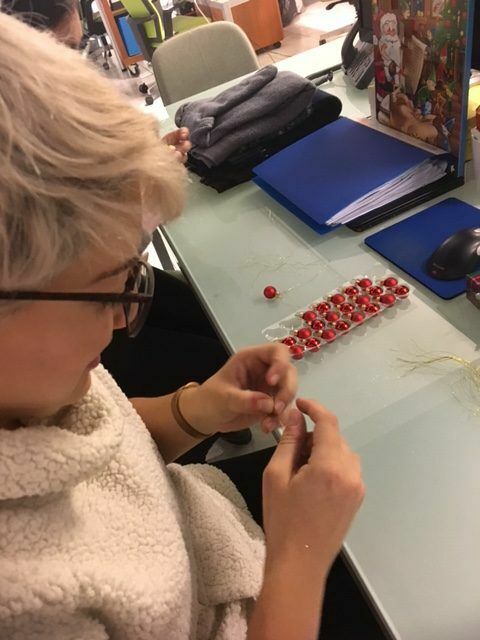 Danika McGyvered hooks from floss for the baubles, as the hooks were presumably traded for something more useful. Teri, on the other hand, jammed the baubles onto the sticks because she’s all about the ‘if you can’t beat it’ life. Astrid ergonomically sprinkled glitter-frosted acorns at the apex of the branches. Our copywriter tried treading some tiny red baubles and failed, leaving them for Teri to tie.
Naomi proved that she can put knots in anything by outpacing Teri 4 to 7 on the strings for the red baubles.
Seeing Teri and Naomi struggle to tie strings for the little red baubles, Astrid suggested a paperclip instead – and was shot down with ‘we’re going to decorate properly!’ No prizes awarded for who said that.
Melissa brought up the fairy lights – hastily asked for by Teri – and gently suggested that putting the Christmas lights on before the baubles was not, perhaps, the most economical way of decorating a Christmas tree. However, given that the existence of fairy-lights had not been confirmed until that moment – and given the fact that three quarters of the baubles were still attached – it was decided that decoration would go ahead, and the fairy-lights would just go on at the end. 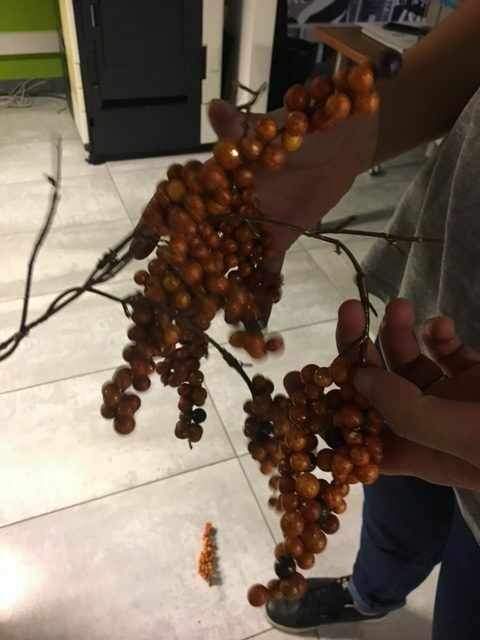 We also found these decorations. We did not know how to decorate with them.
So Teri tore it apart and put it on the branches. Problem solved!
Teri discovered a singing, shining, blinking Santa hat. 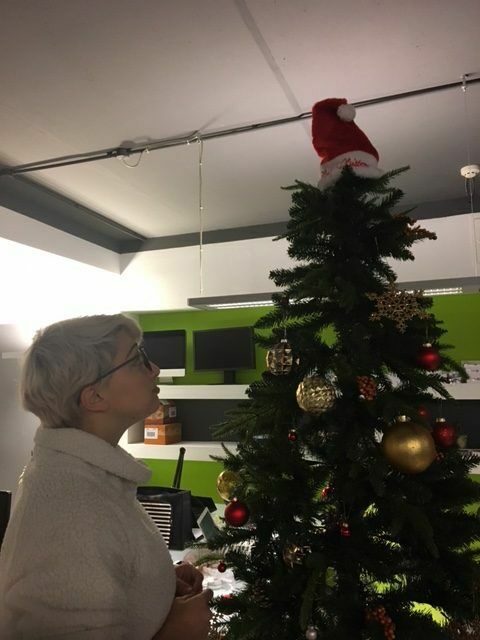 It was taken away from her and hidden at the top of the tree, where she cannot reach.
Pablo suffered a tragic fairy-lights embalming accident which left him glitzy, before Teri and Nella managed to untangle him and approach the tree for further decoration. 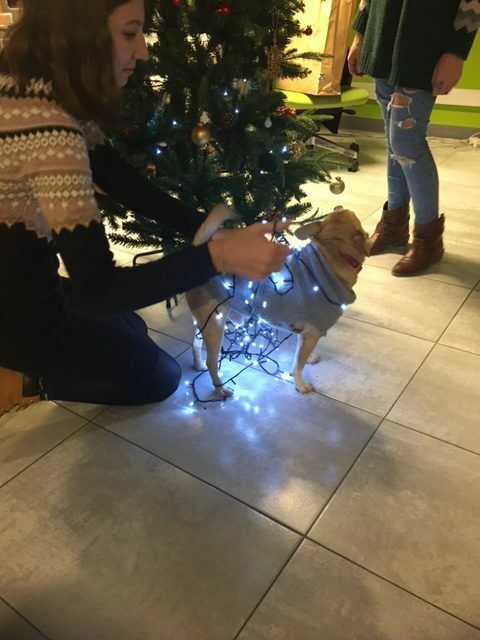 What followed, when the tree was bebaubled and beacorned and beberried, Nella and Teri attempted to wrap the lights around the Christmas tree. Final tally: two baubles dropped, tree literally electric with festive spirit – success!
Then Teri decided a change of lights was necessary (at this point, nobody asked why), and the tree was unwrapped and rewrapped.
There was a lot of bickering and denigrating of people’s music choices. There was a lot of mockery of Thomas’ choice of tiny seasonal baubles (you can see them in the picture! Bonus if you can spot all of them, and win one for Thomas’ corner).
Anne introduced the office to Swedish Christmas music from the 80s, which is a transcendent experience in itself. 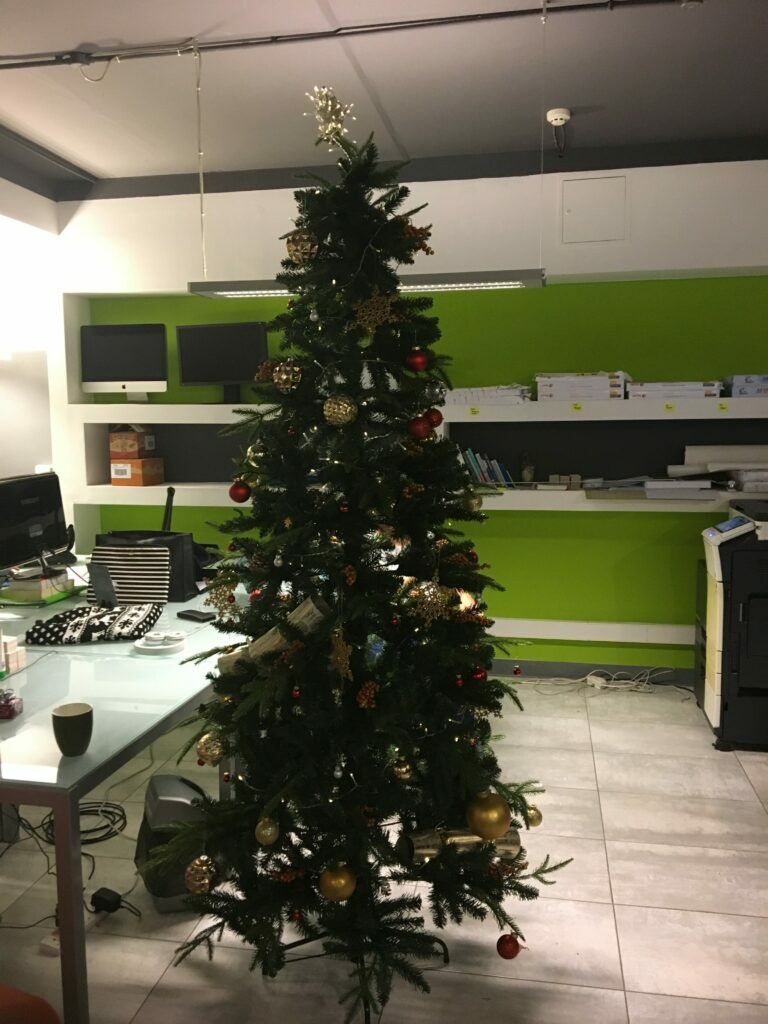 Finally, the tree stood decorated – a little lopsided, a little too many lights on one side, a little too many orange twigs and bright yellow Christmas crackers in some areas – completed, and maybe not exactly what anyone had imagined (the tiny orange baubles were a surprise to everyone), but it’s ours, and we stand behind it. 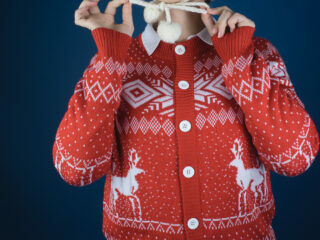 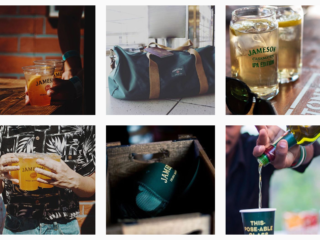 Next Post (n) On Social Media Marketing and Financial Sense